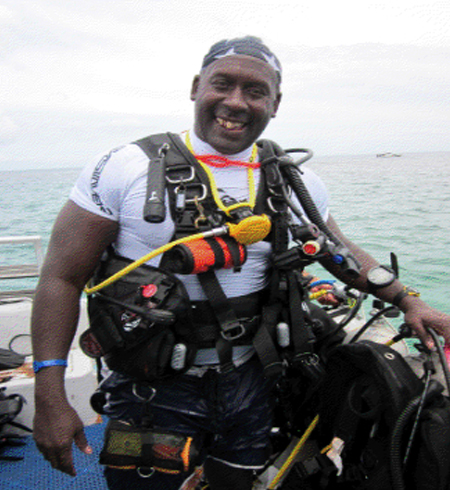 Jay Haigler has been excited about scuba diving from the first day he attended the UAS “Introduction to Scuba Diving” class in 2005. He received his initial Open Water training from Dr. Jose Jones and Sylvester Smith and continued his training with Alex Colvin.

Jay understands the necessity of continuously training in order to make safety in the water a top priority. For a number of years, he has worked with the UAS Safety Officer as a Dive Assistant to help with the annual club checkout. Jay also works with Dr. Jones and Sylvester Smith, assisting them with the annual UAS Open Water Class.

Jay is always looking for a diving opportunity. His personal philosophy is that a “Good Diver is Always Diving….as much as he or she can”. Jay is a prolific diver. Since his PADI Open Water certification in July, 2005, he has logged over four hundred (400) dives. He has travelled with the club to destinations from the Caribbean to Malaysia.

Jay has been recognized for dedication to UAS and achievements in the sport of scuba diving with the 2005 UAS Most Outstanding Student Award; 2010 UAS Most Dives of the Year Award (130 Dives); and 2010 Co-Recipient of the UAS Founder’s Award. Jay and his wife, Vanessa received the UAS Founder’s Award for best representing the goals, principals and objectives of the club. This is the highest award given by UAS..

Jay has a strong interest in underwater archeology. He has participated in the underwater archeology program, “Diving With A Purpose” (DWP), sponsored by the National Association of Black Scuba Divers (NABS) for the last five years. He is an instructor in the DWP program.

Jay has become a National Oceanographic and Atmospheric Administration (NOAA) Scientific Diver. There are only five hundred and eighty-three (583) NOAA Divers worldwide. Also, he has been admitted into the NOAA Diver Program. The purpose of the NOAA Diving Program is to train, certify and equip scientists, engineers and technicians to perform a variety of underwater tasks in support of NOAA missions.