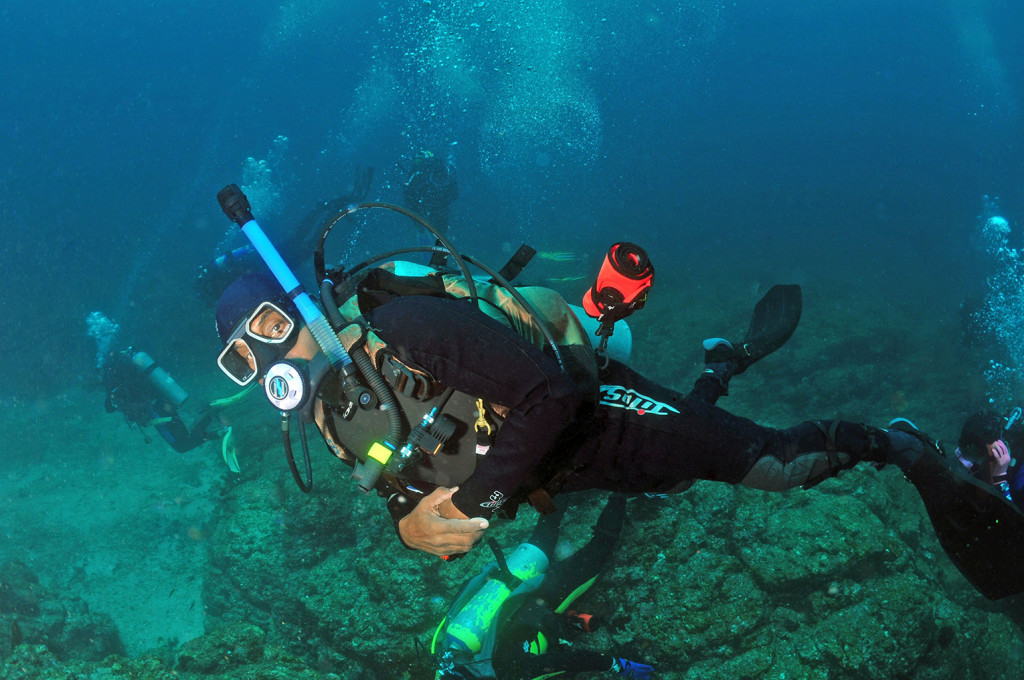 Dr. Jones’ career as an educator and scientist spans thirty-seven years. For twenty-five years he taught at the University of the District of Columbia as a professor of marine biology and environmental science. He also served as Chairman of the Department of Environmental Science, Dean for the College of Life Sciences and Provost and Vice President of the University. Dr. Jones holds a master’s degree from Howard University in Aquatic Biology and a Ph.D. from Georgetown University in Marine Biology. He was a three-time Fellow of the National Science Foundation. As a Fulbright Scholar, he studied Marine Biology at the University of Queensland, Australia and dove the Great Barrier Reef for two years.

Dr. Jones began his diving career while serving in the U.S. Army. Returning home as a Purple Heart Veteran from a tour of combat duty, Jones enrolled in college and joined the Atlantic Skin Diving Council (ASCD) where he served as vice president, training officer, spearfishing chairman and scuba rodeo director. While a senior in college, he formed the Underwater Adventure Seekers (UAS) of Washington, DC in 1959. UAS is one of the oldest dive dubs in the world, and it predates most national certifying organizations.

One of the objectives of the Underwater Adventure Seekers (UAS) is to enjoy safe diving and related activities. Drawing on his military training and the Scuba System, Dr. Jones established high standards for dive training and annual requirements for all members to complete checkout of their diving skills. He emphasized the importance of maintaining a firm foundation in baste skills including swimming, rescues, and safety skills. If divers can swim well, they have the confidence to perform better; and they are in a better position to assist someone else. UAS club members are encouraged to continue their dive education and to keep their DAN memberships and insurance current. The annual checkout has kept the club focused on diving competence and has kept UAS strong and vibrant.

As a master scuba instructor (PADI MSDT #1031), Dr. Jones has amassed more than 6000 dives in more than 50 countries where he has spread his message of swimming and diving safety. Dr. Jones is a spearfishing champion, scuba rodeo champion, and an underwater photographer/ videographer. He has been recognized by PADI for his many accomplishments and his tireless resources to the diving industry. Dr. Jones was honored to receive the Scuba Schools International (SSI) Platinum 5,000 Award for logging over 5,000 dives and contributing to the development of recreational scuba diving in America. 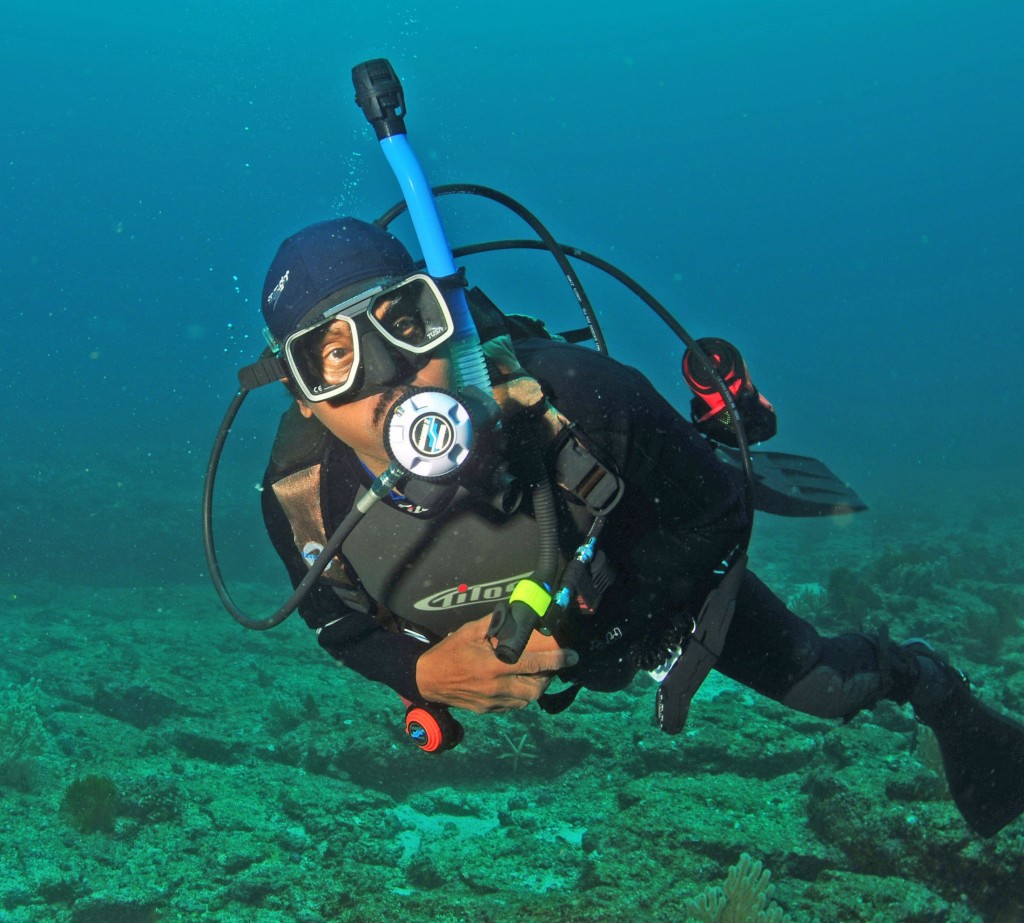 Dr. Jones is co-founder, former president, and current chair of the Science & Education Committee of the National Association of Black Scuba divers (NABS). NABS, organized in 1991 under his leadership, has formed over fifty dive clubs in the United States and around the world, many of them are modeled after UAS. NABS members and/or clubs can be found in Africa, Australia, the Bahamas, the Caribbean, Central and South America, Fiji, Hawaii and the Maldives Islands as well as the continental United States. NABS has already brought hundreds of people to recreational diving and the association is destined to introduce tens of thousands of more people to recreational diving. Dr. Jones and NABS have been recognized in forty publications including the Washington Post, New York Times and the National Geographic, by NBC, BET, CNN, The History Channel and many local television stations. Dr. Jones was inducted into the Washington, DC Hall of Fame in April 2008, and he was the recipient of the highly DAN/Rolex International Diver of the Year Award for 2005. He was also selected as Sport Diver Magazine “Diver of the Year” in 2008 and selected as Beneath the Sea, Diver of the Year, 2009.

Through UAS and NABS, Dr. Jones and his team have trained and certified over 2,000 divers free of charge. In forty-five years he has taught over five thousand people, mostly children, to swim. His commitment to volunteerism comes from his belief that people who have something to give should give to others, whether it is knowledge, skills, or support. Dr. Jones, as an orphan himself, is aware that there is a world of people who just need someone who has faith in them and will show them how to accomplish. Not only did he grow up in a close knit community where many people taught him things and encouraged him to excel, but his teachers and coaches at Dunbar High school and Howard University trained him and students to be leaders who would shape the world and give back to the community.

Another way that Dr. Jones fulfills this commitment is by visiting schools and colleges to speak with students about careers in oceanography and environmental sciences and about the sport of diving. He easily identifies with the students whose eyes light up as their curiosity and excitement remind him of himself, when he was a junior high school student, listening to a guest speaker talk about oceanography. The young Jose Jones decided that he too would become a Marine Scientist and explore the oceans.

Dr. Jones, a seventh degree black belt in Taekwondo Do, also applies his standards for excellence and volunteerism to the marital arts. For thirty-eight years, he has trained thousands of adults and children in the Washington, DC area free of charge. His commitment to a high standard for training can be seen in the confidence and tournament record of his students. The Wheel Kickers Taekwondo Do club was featured in Ripley’s Believe It Or Not as “The Winningest Martial Arts School in America.” It is not unusual for his students to be accomplished in both the martial arts and scuba diving.

Dr. Jones’ love for diving and swimming extends to family. Both his wife, Paula, and his daughter Kendall are swimmers and divers.

Dr. José Jones serves as a role model and mentor for many people of all ages, creeds and backgrounds. His leadership and standards for excellence have shaped many divers and emerging leaders.