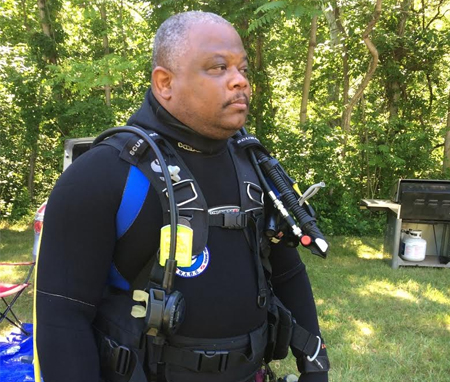 Donald Strong was trained in Va. Beach, Virginia, and received his Open Water certification from SSI in 1995. After moving to Maryland in 1998, Donald decided after 5 years to reach out to UAS dive club and decided to take the Open Water Class again but this time under PADI and became a member of UAS in 2003.

Donald helped with different events for the club and served on the Dive Calendar committee for a year. During that time, Donald worked on his Advance Open Water, Rescue Diver and other certifications such as Boat Diver, Wreck Diver, First Response, Aquarium Diver and Master Scuba Diver in 2016, to name a few.

While Donald has enjoyed each of these dive spots, on his bucket list is the Spiegel Grove, USS Oriskany and to dive the island where his grandmother’s family is from – St. Kitts. In addition to gaining more diving experience, Donald completed his PADI Divemaster certification June 2017 and is continuing to complete additional training.

As a PADI Divemaster, Donald is helping others obtain their dive goals and education. He is also helping his daughter who received her Open Water certification at the age of 14. She is participating in Youth Diving with a Purpose and focusing on Marine Science in school. Donald is devoted to the sport of recreational diving and membership in UAS for years to come.