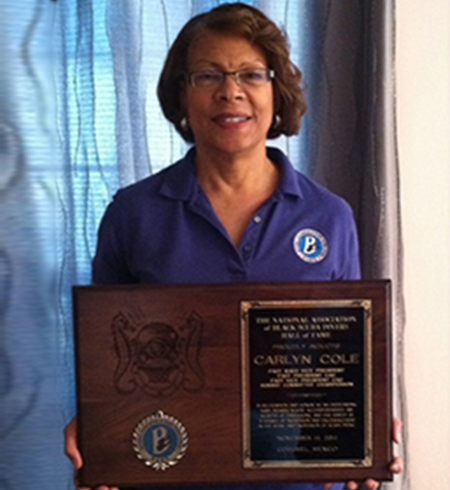 Carlyn joined the National Association of Black Scuba Divers in 1994 when she attended her first NABS Summit in Cozumel. She became a lifetime member of NABS in 1998. Carlyn has been diving all over the world with UAS and NABS.

Carlyn served as vice president of NABS from 2008-2009. As president of UAS she has attended the NABS president’s meeting 5 times. She has worked on the NABS summit planning committee for years and she has served on the NABS election committee. She helped plan the 1998 NABS youth summit in Key Largo, Florida. She was the lead planner for the 2007 Henrietta Marie Pilgrimage for the NABS’ Science and Education Committee. In 2007, she spoke at MOTE Marine Lab Lecture Series and at a Sarasota, Florida high school about African-American women who dive and their contributions to UAS and NABS.

Carlyn has attended every NABS Summit except one since becoming a member, a record she is proud of. In 2006, Carlyn retired as an Advertising Account Executive for The Washington Post. Her work experience prepared her for selling advertising in the NABS Summit Souvenir Booklet that has generated thousands of dollars for the organization through the years. She has enjoyed meeting and diving with the members of NABS and is very proud of her Hall of Fame award.