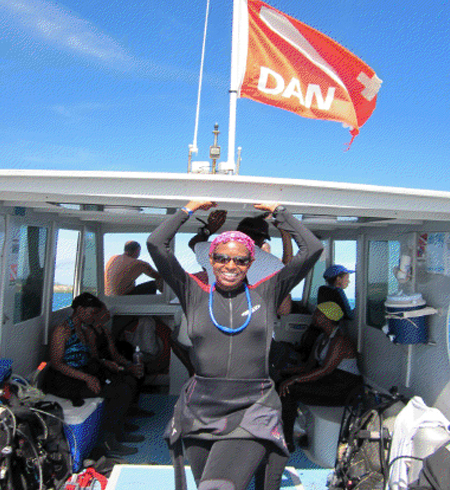 Vanessa Haigler has always been excited about been near and in the ocean. She first tried scuba diving while vacationing on the Grand Cayman Island in 2004. V is active in a variety of athletic activities. She is a tri-athlete and former marathon runner. She qualified and ran the Boston Marathon in 2003. Vanessa received her initial Open Water training from Dr. Jose Jones and Sylvester Smith and continued her training with Alex Colvin.

Vanessa has been recognized for dedication to UAS and achievements in the sport of scuba diving with the 2007 UAS New Diver of the Year Award and 2010 Co-Recipient of the UAS Founder’s Award. Vanessa and her husband, Jay, received the UAS Founder’s Award for best representing the goals, principals and objectives of the club. This is the highest award given by UAS.

Vanessa has a strong interest in the medical aspects of scuba diving. She is a PADI Emergency First Response and Oxygen Administration Instructor. V plans to work towards obtaining Divers Alert Network (DAN) specialty certifications that deals with diver safety and dive injuries/illnesses. She has participated in the underwater archeology program, “Diving With A Purpose” (DWP), sponsored by the National Association of Black Scuba Divers (NABS).

Vanessa has served as member of NABS Aqua Corps since 2009. She is a Lifetime Member of NABS.