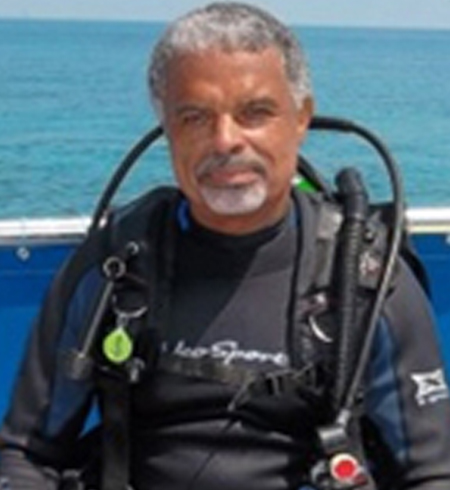 Kim Walker – NABS Northeast Regional Representative
2015 National Association of Black Scuba Divers (NABS) Northeast Regional Representative Kim Walker first became interested in scuba diving in 1997 while stationed at Hickam Air Force Base, Hawaii. He subsequently became a certified diver and his passion in diving took off in the years that followed. He pursued several dive opportunities that included joining the Underwater Adventure Seekers (UAS) of Washington, D.C., sought advanced certifications, and most importantly, became an avid diver with over 1000 logged dives. Kim strongly felt the need to give back to the sport and share his experiences with others by becoming a scuba instructor. In the past five years, Kim has authorized over 200 diving, referral, and specialty certifications. In addition, since joining UAS in 2001, he has served as their treasurer for six years as well as the NABS treasurer for over two years. He is also a ‘Diving With A Purpose” instructor focusing on underwater archeology and a life member of NABS.

Kim has been acknowledged for several diving and dive related accomplishments. In 2005, he was UAS Co-Diver of the Year. Soon afterwards, he was recognized for UAS Most Active Diver in 2006, 2007, and 2009. On the national level, Kim received the 2012 NABS President’s Award. In 2013, he was bestowed the prestigious UAS Founder’s Award.

Kim’s goal is to dive in all of the world’s top diving destinations at least once.